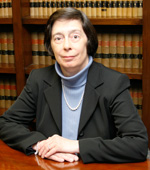 Admitted to the Bar: 1981, Illinois and U.S. District Court, Northern District of Illinois.

Kathy was raised on the south side of Chicago and in Hinsdale, Illinois. In 1973, she received a Bachelor of Urban Planning degree from the University of Illinois (Champaign/Urbana). She worked for several years as an urban planner for the City of Naperville. She began her legal career upon graduation from Loyola University of Chicago School of Law in 1981.

Kathy has concentrated her practice in the areas of land use and zoning law and in commercial and residential real estate transactions. She has represented many land developers and institutions in pursuing their development and growth strategies.