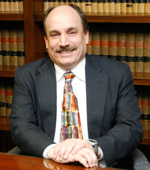 Kevin graduated in 1980 from Michigan State University, with a Bachelor’s Degree in Criminal Justice and Political Science. He graduated in 1985 from John Marshall Law School. While in law school, he served on the Moot Court Executive Board.

Kevin joined the Firm in 1984 as a law clerk prior to completing law school. As a clerk, he learned all the nuts and bolts of the practice of law from legal research, recording documents, filing lawsuits, filing documents with governmental agencies, and even serving legal documents on various parties.

Kevin represents a variety of small and large businesses, real estate developers and many individuals. He has handled both large and small transactions.

Kevin is active in the Community. He is a Member of the North Central College Board of Trustees. He has been the Chairman of the Edward Foundation and serves on the Edward Hospital Board of Trustees. He is on the Board of Directors of First Community Bank Naperville. Kevin has been a Member and past President of the Naperville Jaycees. The Naperville Jaycees awarded him a Lifetime Achievement Award. He served on the Saints Peter and Paul Athletic Association for seven years, one year as President. He is a current Member of The Naperville Sunrise Rotary.

Kevin finished the inaugural Wisconsin Ironman Triathlon in 2002. He also has finished the Boston Marathon (3 times), the Chicago Marathon (7 times) and Grandma’s Marathon.

Kevin grew up in Naperville and he and his wife, Sue, reside in Naperville. His daughter Becky graduated with honors from Indiana University. His son, Ben, graduated from the University of Wisconsin Stevens Point, where he was an All American Swimmer. His youngest son, Luke, is a graduate of the University of Wisconsin Madison, where he was a disc jockey on the student run radio station WSUM 97.1.